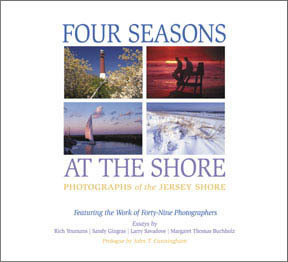 For generations, people who have lived or vacationed at the New Jersey Shore have felt deeply connected to it — no matter where they live or how long it has been since they’ve had Jersey Shore sand between their toes. Four Seasons at the Shore, while not offering sand for the toes, immerses the reader in this coast. From the ocean to the bay, from the sand dunes to the salt marsh, from boardwalks to the amusements and arcades, this book captures the essence of the shore from Sandy Hook to Cape May and along the Delaware Bay.

Featuring the extraordinary work of more than four dozen talented photographers, this full-color pictorial hardcover both documents and celebrates the New Jersey Shore. With intimate essays about each season by noted shore writers, this book is an appreciation and a tribute to this beloved coastline.

Four writers share their personal interpretation of the Jersey Shore in each season. Rich Youmans, co-author of Down the Jersey Shore (Rutgers) and editor of poetry and literary anthologies of this coast, gives us spring — punctuated with visits to shore towns, north to south. Sandy Gingras, author and creator of the "How to Live" series of books, including How to Live at the Beach, writes poetically about the embrace of summer. Autumn at the beach is described by Larry Savadove, co-author of Great Storms of the Jersey Shore, and the novel, The Oyster Singer. Margaret Thomas Buchholz lets us feel winter in the bungalow near Barnegat Bay where she grew up.

The 332 color images in the book are by professional photographers and dedicated amateurs, who offer an eye for the details, the colors, forms, slant of light and seascapes that all make the Jersey Shore a visual experience unique in America.


“Four Seasons at the Shore is compelling and dramatic, the shore book of the year.”

"To this reviewer the most compelling essay in Four Seasons at the Shore is that of Margaret Buchholz, which begins with a recounting of long ago life on a barrier island. Reminiscent of the Henry Beston classic, 'The Outermost House', it sheds an intimate winter light on an aspect few will ever experience: growing up – and getting up – through the long seashore cold with cruel nighttime frost and marrow-chilling winds coming from the four points of the compass."

These two anthologies, published in 2016 and 2018, offer an all-encompassing perspective of Long Beach Island – the real LBI we love and hold in our collective memories. It includes our happy, carefree childhoods at the beach, our parents and grandparents making the trip to the shore, our summer foolishness as teenagers, and our pursuits and reflections on what matters as we mature. Those activities may be a little different in different eras, but the experiences (and feelings) are much the same today. The accounts range from a rare 1833 newspaper commentary to the end of the 20th Century.

Josephine: From Washington Working Girl to Fisherman's Wife. A Memoir 1917 - 1959

Josephine is a memoir based on the diaries and letters of a professional woman ahead of her time. In 1918, she left a job on the county daily in Michigan to go to Washington DC to work for the War Department–they were called Government Girls back then. When the war ended she got a job as a secretary and then editor to Frank G. Carpenter, the country's first travel writer and author of books about his world travels.

After he died she went to work for Lowell Thomas as a researcher and ghostwriter, traveling throughout Europe in the late 1920s. During this period, she had a harrowing first airplane flight across the English Channel, and just before the stock market crashed in 1929, cruised the Caribbean on an outrageously extravagant trip aboard Count Felix Von Luckner's four-masted windjammer. She wrote it all down.

She married in 1931 and attempted to combine work with motherhood. Part 2 brings the couple to New Jersey in 1933 where they settle on sparsely populated Long Beach Island, her husband's former summer place. His family business failed in the Great Depression, and she tried to make a living by writing. This part documents finding happiness in a simple life at home, life at the shore during the 1930s and World War II, the woman's renewed interest in writing when a new weekly newspaper begins, and her death from cancer in 1959.

For millions of people, summer means travelling to the New Jersey Shore. Every generation brings a new perspective and a new sense of discovery to this beloved region. Every visitor returns home with tales of their experience along this 127 mile long sandy coastline of boardwalks and beaches.

At the dawn of the new millenium, Shore Chronicles: Diaries and Traveler's Tales From the Jersey Shore 1764-1955 enlightens contemporary shore-lovers with fascinating historical perspective. Illustrated with 50 historic photographs, etchings and fine art images, this comprehensive collection begins with adventure travel in 1764 when the shore (and much of New Jersey) was still a wild frontier. The book concludes in 1955 with the opening of the Garden State Parkway, which brought exponentially more visitors - and rapid development - to the Jersey Shore.

A total of 50 accounts comprise the book. Writing by such well-known figures as John J. Audubon, Walt Whitman, Robert Louis Stevenson, Stephen Crane and Sir Arthur Conan Doyle is included. But, perhaps most interesting are the selections from private journals, letters, and diaries from unknowns vacationing or visiting the shore.

As fresh as their experiences are to shore visitors each year, most activities here are timeless — the fundamental attractions of the seashore resonate throughout time. Yet it is stunning to read how different the landscape and environment was before development.

Edited by Margaret Thomas Buchholz, who is co-author (with Larry Savadove) of Great Storms of the Jersey Shore, with a forward from renowned New Jersey historian John T. Cunningham.

Shore Chronicles joins two other acclaimed Jersey Shore literary anthologies published by Down The Shore Publishing — Shore Stories: An Anthology of the Jersey Shore, a collection of contemporary writing, and Under A Gull's Wing: Poems and Photographs of the Jersey Shore — in a trilogy of extraordinary writing about this region.

New Jersey Shipwrecks takes us on a gripping voyage through the "Graveyard of the Atlantic," a name bestowed upon the state's treacherous shoals and inlets. Before this coastline became a summer playground of second homes and resort beaches, it was a wild frontier of uninhabited and shifting sandbars. From the days of sail to steam and oil, ships (and even submarines) have been drawn to this coast. And, for thousands of vessels, it became their final resting-place.

Early rescuers braved the seas, rowing small boats, using simple buoys and rope to help the wreck victims. Others invented new technologies to assist in rescues. Quoting from original documents, letters and reports, Shipwrecks reveals the sense of duty and service which prevailed in these brave rescuers; many devoted their lives–literally–to help save the men and women whose own lives were turned upside down in stormy Atlantic waters.

From the early wrecks of the 18th century to the present day, the life-and-death drama of maritime disasters is captured in Shipwrecks, along with the history of the U. S. Lifesaving Service (later to become the Coast Guard), lighthouses, legends, and true accounts of heroism.

One hundred and forty-two historic photographs and illustrations are included in this large-format hardcover. The book includes a listing of hundreds of other wrecks along the Jersey Shore, as well as an index and bibliography.

Great Storms of the Jersey Shore

Generously illustrated with nearly two hundred photographs, engravings, and maps, the book is an opportunity to appreciate the horror and beauty of the great storms.
The authors have combined exhaustive research of archival reports and old news accounts with interviews of more than 200 people who experienced major storms first-hand. Much of the book is devoted to these vivid stories, with extensive narratives of the devastating 1962 nor'easter, the great hurricane of 1944, and in the new 2019 edition, Superstorm Sandy. Those who have known the power of the great storms draw us in to a time and place where survival is uncertain. Few living at the shore today have experienced extreme storms, but for those who have–as they describe in this book–it is a defining moment in their lives.

The book also touches upon the mythic nature of great storms, with excerpts from literature, the meteorology of coastal storms, and environmental implications for those living along the coast. It is a significant reference–covering storms from the voyages of Columbus to the horrific Superstorm Sandy in 2012.